JOURNALISTS IN 1950S NOTED THE AIRLINE VICE PRESIDENT AS MUCH FOR LOOKS AS SKILLS; ‘A VERY HOT-LOOKING DISH’

When Carlene Roberts was named a vice president of American Airlines in 1951, newspapers treated her as a freakish phenomenon—a female executive. They were as likely to comment on her looks as on her skills as a lobbyist overseeing the airline’s Washington, D.C., office.

Ms. Roberts was “as glamorous as they come,” gushed a columnist in the Miami News. She was “a very hot-looking dish,” reported a Washington columnist. In the Los Angeles Times, Dorothy Chandler described her as petite, brilliant, feminine and quick-witted. The writer added: “An Oklahoma girl, she started up her ladder to fame by the secretarial approach. Girls, take note and work on that shorthand.”

Ms. Roberts resigned from American Air and ended her career in September 1954 when, at age 41, she married Lothair Teetor, the former head of a car-parts maker who was serving as an assistant secretary in the U.S. Commerce Department. He died in 1962, and six years later she married Justus B. Lawrence.

Early in her career, she told an Oklahoma newspaper that a woman in business needed to play down her femininity: “She’s got to play as man to man, and think like a man.” 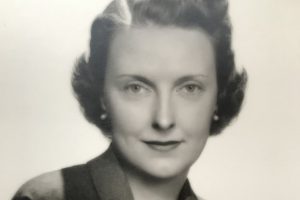 Carlene Roberts Lawrence died Oct. 29 at her home on Park Avenue in Manhattan. She was 105. PHOTO: LAWRENCE FAMILY

American Airlines said she was the first woman to serve as a vice president of a major airline. Newspapers treated her as a celebrity. The Daily Oklahoman described her this way: “Blond. Blue eyed. Tiny. But not the least bit demure. That’s Carlene Roberts, who called Oklahoma City home before she started an aeronautical climb to fame that made her the only woman junior executive in the domestic airline industry.”

When she was named a vice president in 1951, a United Press reporter said she had “supersonic drive” and could calmly handle “nerve-wracking tasks that turn strong male executives into pill fiends.”

C.R. Smith, who was president of the airline when she was a vice president, told her he had agreed to her promotion but in general didn’t approve of women in executive roles, she said in a 1997 interview with the New York Times.

Carlene Roberts was born Aug. 28, 1913, in Water Valley, Ky.  She was an only child. Her father, a school teacher, died in an electrical accident several months before her birth. Her mother, Josephine Lewis Roberts, later worked as a domestic helper and as a secretary. The two of them moved to Oklahoma, where they had relatives. Carlene went to high school in Oklahoma City and graduated at 16. She later recalled weeping after an A-minus in one class spoiled an otherwise-perfect report card.

An aspiring actress, she attended the Horner Conservatory in Kansas City, Mo., to study drama and graduated from the University of Oklahoma in 1934 with a degree in dramatic arts. To improve her chances of finding steady work, she also learned secretarial skills. Those won her a job at the Chamber of Commerce in Oklahoma City. Her talents were noticed by Orval M. “Red” Mosier, who was the city manager in Oklahoma City before becoming an airline executive.

After joining American Airlines, he hired her in 1938 as a secretary and later promoted her to oversee the airline’s Washington office. She told the Daily Oklahoman that Mr. Mosier was “one of the minority of guys who is willing to give a woman an even break in business.” She described her job as “pressure like crazy.”

Her engagement to Mr. Teetor in 1954 drew headlines in Washington and his home state of Indiana, where he had been a state legislator and chairman of Perfect Circle, a maker of piston rings. Mr. Teetor, a Commerce Department appointee in the Eisenhower administration, was 16 years older than Ms. Roberts. His first wife had died several years earlier.

“I really wanted to make it a happy marriage,” she said in a 2007 oral history. “It never occurred to me not to resign” from her job.

Her second husband, Mr. Lawrence, a graduate of Yale University and an author, had been the U.S. Army’s top public relations officer in Europe during World War II. He died in 1987.

Ms. Lawrence never had children. Robert Y. Lewis, a lawyer in New York, whose father was her cousin, said part of her success was due to being very organized. “She anticipated every contingency,” he said.